More Delicata Goodness and the Power of Doughnuts

I want to publicly thank two of my readers today for being so awesome. Sue C. sent me a bunch of Swarovski crystals in gorgeous colors just because she's so nice, and Joyce M. sent me stamped samples of PTI's terracotta ink, which allowed me to see that it's a perfect replacement for my obsolete Ancient Page henna. Thank you, ladies! 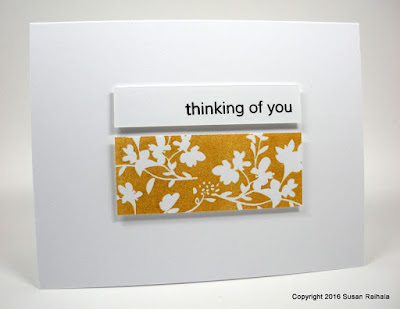 Do you remember color-blocking? I don't see it much these days, but I have always adored the crisp, clean lines of rectangles arranged pleasingly on a white backdrop. When I found myself with a smallish scrap of the Delicata gold-stamped background, I decided a color-blocked card would be in order. 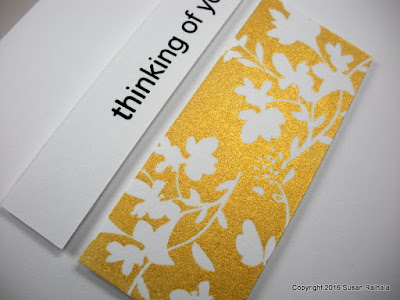 Something to note: the shorter block is approximately half the height of the taller one. Conforming to the rule of thirds rarely steers you wrong. The sentiment is placed asymmetrically, on purpose. The "thank you" sentiment I considered first only covered half the width and looked really weird. The "thinking of you" sentiment occupies approximately two-thirds of the width of the panel, with one-third of it left blank. This forces the eye to move around a bit and adds interest. Rule of thirds. It rocks.

Once again, I will say if you don't have the Delicata gold ink pad, get it. Please. It will make you happy.

And who doesn't need a little happiness in her life right now?

Speaking of happiness, today our church's regular Bible study had extra doughnuts. We always have extra treats (we're Methodists so not having extra would be unnatural), and the extras usually go to the preschool teachers. Well, as it's teacher appreciation week, the church's conference room has been converted to a lunch room, and mounds of food were already there. The teachers didn't want or need the doughnuts.

I took the doughnuts. Hold that thought.

When my car was totalled in February, we replaced it with a new one and ordered new plates. The state of Ohio requires plates on the front and the rear bumpers, but when my plates came, I realized that there were no holes in the front bumper prepared for a license plate. For weeks, now, I have been driving around in violation of the law, stymied by the lack of skillz needed to attach the plates.

This morning, as I dropped my son off at the high school, a story on NPR reported that someone had been pulled over for missing a front license plate. No idea what the story was about, because as soon as I heard that, it occurred to me that I might need to do something about my own missing plate.

After Bible study, with a box of doughnuts on my front passenger seat, I drove straight to the Mazda dealership and into the service bay.  In my most helpless, little old gray-haired lady voice, asked the gentlemen to attach my license plate. Of course the answer was yes, so I said, "Would you all like some doughnuts?"

Everyone was happy. The Bible study class plus a bunch of hard-working mechanics got doughnuts. I'm driving legally now. The teachers feel appreciated.

I'm so happy to be a Methodist.

Posted by Susan Raihala at 8:38 PM