My question about using new or old stamps prompted a lot of responses, overwhelmingly in favor of using older stamps and newer stamps. This sort of surprised me because we see so much hype and enthusiasm for new releases these days, and I wondered if I were missing out by severely restricting new purchases.

Not that I could go out and buy, buy, buy anyway. Our oldest is going to college this fall, after all. But I could loosen the purse-strings a bit, I suppose.

There are really two problems for me. First, I already have lots and lots of stamps, and some of the new stuff looks close enough to stuff I already have that it seems silly to buy it. And, as reader Sue C., pointed out in an email, many of the super-cute stamp sets being released aren't very versatile. She's learned the hard way that she can make one or two cards with those sets and then...she's done.

I've learned that lesson, too.

The second problem is boredom. When you're a clean-and-simple stamper, there are only so many options for designing cards with a given set. After a while, I get bored with sets, and this sets me up to buy new stuff. Then, I go look at the new stuff, which leads me back to problem number one.

I am fully aware these are first-world problems. I'm not complaining so much as commenting.

So after reading all your answers, I went through my stamps and pulled a bunch of stuff to retire to cold storage and retrieved a few sets from cold storage for more use.

In the process, I discovered a Hero Arts shadow stamp that was among the first stamps I ever bought lo those many years ago.

And I made these cards. 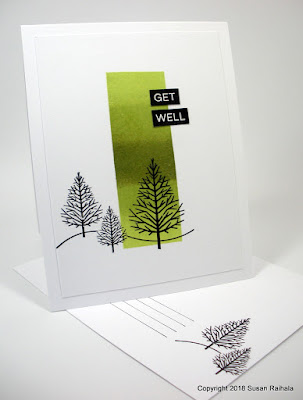 The first card used the same winter stamp used in my last two posts, that delightful tree scene from Papertrey's Masculine Motifs. (A quick check shows that Masculine Motifs is no longer available on their website.) The shadow stamp was inked with Hero Arts ombre ink, first by inking one half of the stamp, then turning the stamp, and inking the other half. This created a light-to-dark-to-light effect that is really neat. 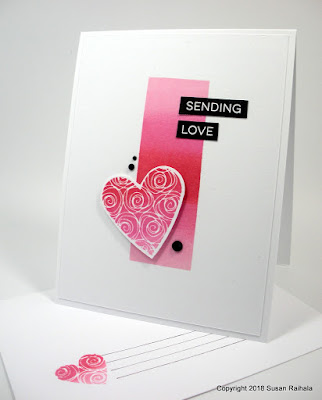 The second card used the same inking technique with the pink-to-red pad and features a heart from Papertrey's Heart Prints...another old set which is still available. It was released with two coordinating heart punches (no longer on the website), so it's long been my favorite heart set. I added the black rhinestones to balance the strong, black sentiment.

These cards make me very, very happy. I hope they make you happy, too!