A Birthday Choo Choo and Many Thanks to Bahb

The first of many children's birthday cards I will make from Clear and Simple Stamps Boys set, recommended to me by my online stamping buddy Sue Berker. 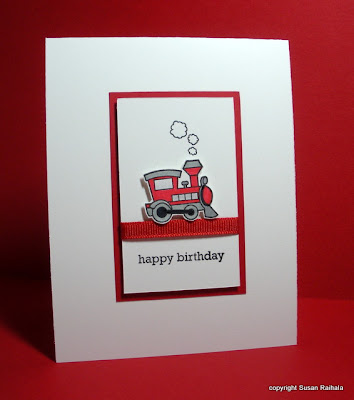 This choo choo sold the Boys set for me because I have a son obsessed with Thomas the Tank Engine (if you don't know who Thomas is, don't ask...you're better off not knowing). Thomas is blue, but I made his friend James, who is red "with shiny new paint."* A stamper can get fab inspiration from her children's obsessions.

You can't tell from the photo, but I used Gina K Luxe paper rather than PTI paper for today's card. There's a funny story behind this.

A month or so ago, I put Gina's white and off white paper and a bow easy in my cart. When I realized the stamp set I wanted was out of stock, I chose to wait and place the order later. A week or so later, I received a package from Gina K Designs.

Huh? In the box were the three items I'd placed in my cart and a note of thanks signed by a name I'd never seen. It was all very confusing, but I figured I must have had a brain fart and placed the order after all and the note was simply from Gina's customer service department.

Last weekend, I received a lovely email from Bahb, who kindly comments here frequently. She asked if I'd received the package from Gina K she had sent, and she signed her real name to the email. It was the same name as the one on the note in the box.

Mystery solved! I am not going crazy, and Bahb is a total sweetheart! Thank you, Bahb, SO VERY MUCH for sending me three things I absolutely wanted from Gina K! I'm having so much fun playing with them, and will show results of that play here on Simplicity.

I've wanted to try Gina K's paper for ever so long, and after years of using PTI white, wow, is it strange to try something new. Gina's paper is very, very smooth, so using Bic mark-its or sharpies feels totally different and is taking a bit of practice to get used to. But the huge advantage of it over PTI is that there is no bleed-through, meaning you can color on one-layer cards and not have an unsightly mess inside! How totally cool is that?!?! OLCs coming soon....

*Will I ever purge these snippets of movie lines about Thomas and his friends from my mind? Or will I be the annoying old lady in the nursing home singing "Thomas the tank engine, rolling along, doo doo doo doo, doo doo doo doo" off key and in a fake British accent at two o'clock in the morning? Sigh.

Posted by Susan Raihala at 6:45 AM