In my first semester teaching Freshman Composition, I had a student bring a graded paper to me and ask, "Why did you add the commas there?" My mind was a total blank. I knew with absolute certainty that the commas belonged, but I'd forgotten why. I recovered nicely by saying, "Let's look that up in your handbook so you'll be able to find the answer yourself next time." Smooth, eh?

That night, I read the entire handbook to refresh my memory about the rules. And I've never again forgotten the rule about commas around nonrestrictive modifiers.

So when several people asked me how I'd come up with the sizes of the rectangles on this card, my first thought was that I'd just used the Force. I didn't think about them. I just made them. 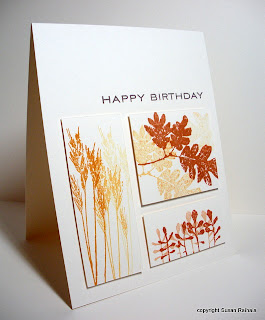 But then, as I considered the question within the context of all I've studied about design in the past eight years, I realized that I've just internalized the rules enough that I don't consciously think about them. But they are there, nevertheless, working away for me every time I sit in my craft room.

I love rules. Especially this one because it's the heart of pretty much every card I make in one way or another.

The Rule of Thirds 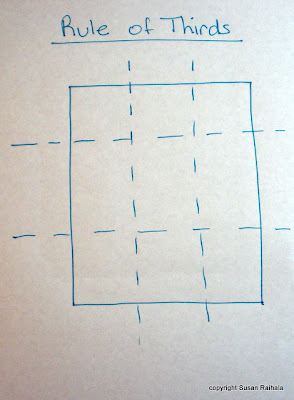 This is what happens when I free-hand something, so now you know why I rubber-stamp whenever possible. But this crudely drawn chart shows the rule for card design perfectly...because it's not precise. It's a rough guestimate of thirds, and that is all you need. Seriously. These lines are the guides for most designs and they are very flexible. You can remove lines at will to create zones of white space and of stamping, as I did on this card, or you can use the top left or bottom right intersections of the lines (the sweet spots) for your focal point placement, or you can add borders along a line to anchor matted images on a card.

Here's a sketch of the actual card, including the precise measurements of the rectangles. The card is a standard 5.5" x 4.25" card. 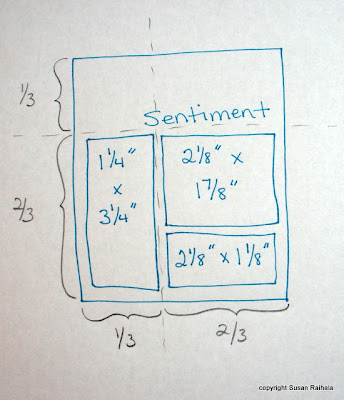 As you can see, the blocks are arranged to take advantage of the rule of thirds...not exactly precisely, but close enough for government work.

Sizing
I started with the left-hand block by stamping the grass onto a scrap of cardstock and then cutting it down to about 2/3 the height of the card. Then I trimmed it a bit more and made it narrow. Then I stamped the smallest block and cut it out so it was about 1/3 the height of the grass block and wide enough to go across the card nicely...about twice as wide as the grass block. Finally, I did the same to the bigger block, but this time I did actually measure and do the math so it would fill the space available properly.

I do all my measuring and cutting with a craft knife and 6" square quilting ruler. The ruler is see-through, so I can place it directly over things and see exactly where I need to cut.

Spacing
The spacing of the blocks is critical...it's all got to be even or it'll look really unbalanced. The spacing between the rectangles themselves must be the same, and then the margins around the edge of the card must also be the same. To do this, I placed the rectangles on the card and fiddled with them until it all looked even. Then, I stamped the sentiment BEFORE popping up the rectangles because honestly, sometimes those dimensionals really get in the way of stamping.

Now, here's where I get a tiny bit obsessive. With all the blocks placed properly, I carefully remove one, apply SU dimensionals at top and bottom, then place it where it belongs WITH TWEEZERS. Then, I repeat until all blocks are stuck.

I hope this explains the process in a way that encourages you to loosen up and play with the rule of thirds in your own designs. It's important to realize that this layout "I" came up with isn't at all original to me. Let's face it. There's only so much you can do with a 5.5 x 4.25 canvas. Plus, this rule of thirds is tried and true and has been around for eons. I'll bet the ancient Greeks used it for designing their temples.

Now, the new card for today trades rectangles for squares, lines them up along the top horizontal line of thirds, and uses my new Martha Stewart bow punch. 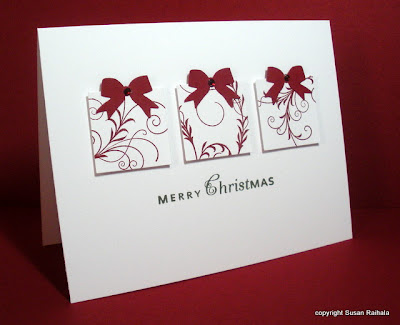 Dang, that Papertrey Silent Night set is more than worth the $24 I paid for it!

Email ThisBlogThis!Share to TwitterShare to FacebookShare to Pinterest
Labels: Design Discussion, For Christmas, Stamps by Hero Arts, Stamps by Papertrey, Tutorials and Techniques