Inspiration Takes an Unusual Direction, Part 2 and a Critique

Inspired by the rad texture of peat pot cards in Take Ten, I pulled out several different textured papers and played, just to see what would happen. Sometimes, as with yesterday's card, playing around works happily. Sometimes, well, it doesn't quite hit the mark.

Today's card uses papyrus, some lovely textured white cardstock from Marco's Papers, and some handmade inclusion paper that has rose petals, twigs, and leaves imbedded in it. It's also an example of good things taken just a bit too far. I'd like to share my analysis of what went wrong, particularly as it relates to adapting collage/shabby styles to clean-and-simple design.

I'm not fishing for compliments...just sharing my thoughts in the hope that they will help inspire you to play around and not to be afraid of making something you don't like. 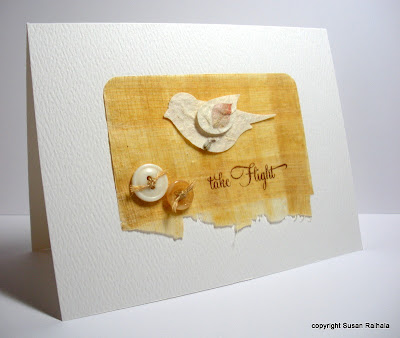 I don't like this card nearly as much as yesterday's card mainly because it's not as visually simple. The punched bird has a lot going on with it...the petal on its wing and the twig on its body, combined with the handmade texture of the paper are a LOT to look at. Add the two differently toned buttons with twine, the rough natural edge of the papyrus, and the curly sentiment, and the card crosses the line from CAS to, well, I'm not sure what, but it's not exactly CAS, is it?

Also, the balance is off. The ivory bird and button need a third element to ground them visually, and I thought the white base would do that...but it doesn't. Perhaps it's because the papyrus panel is just a titch too big. Perhaps the layout itself is simply not effective. Perhaps the sentiment needs more visual weight. Whatever. It's a card that almost works but, in the end, doesn't.

I love all the individual elements of this card....I just should have limited how many I used and rearranged them a bit. This bird card shows how tempting it is to keep adding more stuff...and how in the interest of clean-and-simple design, more stuff often isn't better.

But you never know what will happen if you don't even try.
Posted by Susan Raihala at 11:07 PM