Reader Jeanne sent me an email asking the following question:

"I am wondering if you care to weigh in on how one should place a sentiment vertically. Say, with the focal point a long flower on the left side of the card - should the sentiment be "facing" the flower or the right card edge? I have seen it both ways and wonder if there is a design standard of right or wrongness."

This set me to scratching my head, which isn't helpful at all. So I dashed to my craft space and made a couple of cards to test this conundrum.

I was fully prepared to pronounce strongly in favor of "facing the stem" simply because (for me) intuitively that makes the most sense. The letters have an implied ground on the stem, and by creating that relationship between the sentiment and the image, it should increase the unity of the card.

When I made these two cards, however, I found myself agnostic and unwilling to commit. The top version keeps your eye stationary on the card. That sort of static design can be fine, but I found it disconcerting in a card with so much going on. My eye wanted to move around, and the "facing" right card allows that.

Go figure. My conclusion...at least as far as the above layout is concerned...is that either way works depending on whether you prefer unity or movement.

But of course I didn't stop there. I wondered if centering the image (and simplifying the whole thing) would make a difference. Again, I expected to like the "facing" the stem version better. 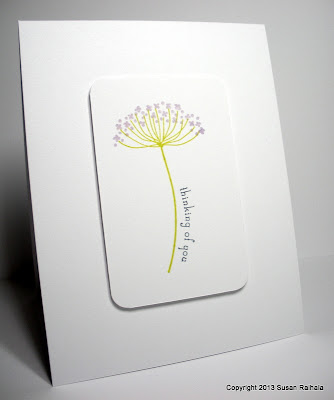 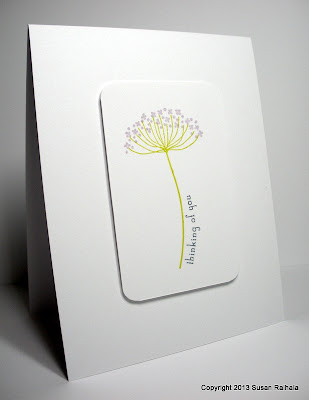 Again, I feel agnostic. It may be that the "facing" the stem version simply places the sentiment just a bit too high on the stem, but I have a hard time feeling strongly in favor of either version. The conflict of movement versus unity still stands, even in the simplified cards.

So, Joanne, I think it's just a matter of personal preference.

What do you think? Does one design principle--unity or movement--win out for you? Do you have a strong personal preference, or are you agnostic, too?