Mark It on Your Calendar! She Used a Colored Card Base! 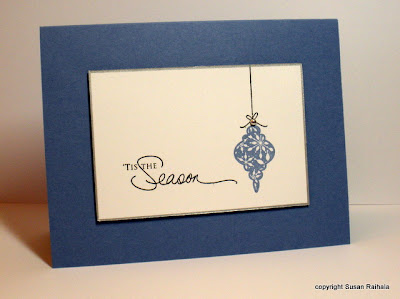 Bwwaaa-haaaa-haaa! I feel like all I've done lately is OLCs and white-on-white layering. As you saw in the pictures of my paper storage, I have lots of colored cardstock, so I decided to use a bit of it on this card.

CAS Design Tip: Contrast today's card with the first card on this post. The single ornament is lost in too much white space on the earlier post. The scale is wrong, and to fix it in that case, I added another ornament, which filled the space better. Another solution is to eliminate the expanse of white by using a smaller panel and mounting it on colored cardstock, as with today's card. Easy peasy. Keep this in mind for smaller images that need a little tighter focus than an OLC allows for.

I can't tell you the number of times I set out to make an OLC and end up with a colored base. It's all part of feeling my way toward a finished card. My process is rarely straightforward. I stamp something, stare at it for a while, stare at supplies for a while, decide to try something, decide that didn't work, or maybe it did, think a bit, do something else...etc. Eventually, I realize it's done (Woohoo!) or it didn't work at all (salvage the pieces and start over). I used to get frustrated and mad at myself when a card didn't work out; now I laugh, learn, and move on.

It's just paper, after all.

Art is messy, nonlinear, loose, and most of all, FUN! It took me an embarrassingly long time to figure this out because I'm just a teeny, tiny bit AR/OCD (ha!), and loose and nonlinear and messy aren't in my character. But then, I am starting to believe that the most important part of growing up is not taking myself so seriously. It feels pretty good.