One of my husband's Air Force flight instructors once said, in a lovely Southern drawl, "It was a good idea that shouldn't have seen the light of day." That's how I'm starting to feel about the butterfly monogram card.

I tried popping the monogram up. Yuck...although to be fair, this might work if you positioned the butterflies specifically to do this. On my card, though, there were too many butterflies crowded under the popped monogram and it looked BAD. I'm just too lazy to try again. Sigh.

I tried using a giant SU monogram (Headline Alphabet) and it definitely made the monogram the center of attention, but it was, alas, too big. Sigh again.

Then I tried a tiny change to the original card, which I think is a little better. 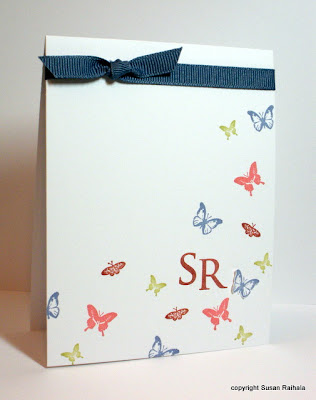 I stamped and cut out a blue butterfly and positioned it a little below the monogram. I think it does draw more attention to the monogram, but I still think there are just too many butterflies. Oh, and I can't take the ribbon off this card because I used the stay-put ribbon technique so there's a big, ugly hole hidden under the knot.

I'm starting to hate this card, which is a shame, because it's really not that bad. Sigh.

Then, I saw Harriet's variation on the card, put her idea together with the gist of Monogram Card #3, and Bob's your uncle: 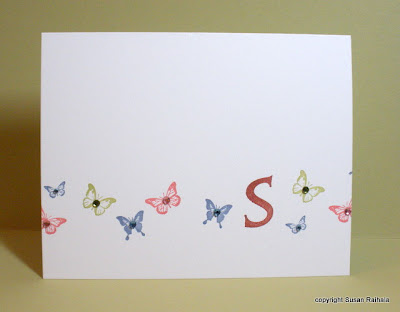 What does "Bob's your uncle" really mean? I don't know, but it seemed suitable here. I am finally happy with my butterfly monogram card. It's random in the same tidy way as Monogram #3, the monogram stands out sufficiently, and, well, who DOESN'T like bling?

Thanks, Harriet, for the inspiration!

Posted by Susan Raihala at 7:06 AM