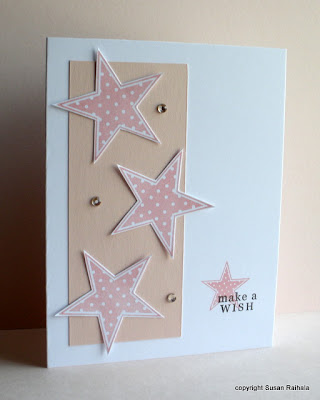 My family has a lot of October and November birthdays, and most are for women. For this card, I wanted to make a positive yet soothing birthday card for a relative who's going through a stupendously rough time.

I toyed with the idea of adding more chocolate to the area of the stars, but the blush blossom really is very relaxing, don't you think? Increasing the contrast with more chocolate or even some close to cocoa would have upped the energy of the card. As it is, the cinnamon VersaColor ink I used on the stars is slightly darker than the blush blossom, which gives a bit of dimension. The gemstones are perfectly understated as well. The chocolate sentiment does draw attention to the message, which is small and not overwhelming.

When you're making a card for someone specific, do you try to do something you think they would like/need/appreciate, or do you follow your Muse? My Muse likes this layout a lot, but she says this card is a tad boring in color. I'm ignoring her because my heart says it's the best for the recipient. Plenty of my cards aren't for someone specific--I've sent over 600 to the troops this year--so my Muse gets to do what she wants a lot.

Sometimes, it's all about the recipient. I hope this card gives her a hug. She needs as many as she can get.

Grady Update: For those who are interested, Grady is doing very well. He just needs to be able to regulate his body temperature, and he can go home! He's eating, sleeping, breathing, and fussing just like he ought to do. I got to hear him squeak on the phone! Babies make so many fun noises...and some not so fun, LOL! My sister is also recovering well. Thanks to all of you for the good wishes and prayers.
Posted by Susan Raihala at 6:42 AM

Email ThisBlogThis!Share to TwitterShare to FacebookShare to Pinterest
Labels: For Birthday, Stamps by Papertrey