I played around with Papertrey's Peaceful Poinsettia for the first time last week and made a bunch of cards with it.

Does anyone else buy a set on impulse, and then stare at it for weeks wondering, "Well, now what? Why the heck did I buy this set?" Then, do you work with it and realize, "Wow, I am so smart to have bought this"? That's what happened with me and this set. Temporary buyer's remorse, followed by great joy.

Here's the first card, and my first with Copic coloring on it. 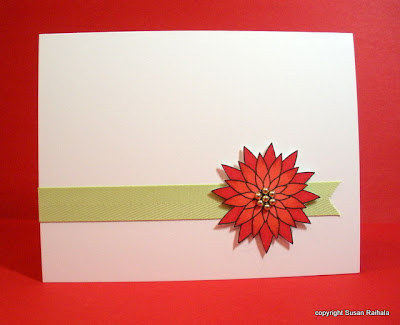 That's right, I used COPICS! Yes, yes, I hear you shouting: "OH MY GOSH SHE SAID SHE WOULD NEVER BUY THEM!!!! SHE LIED!"

No, I didn't lie. I won these three as blog candy, and it would be morally wrong not to use them. I could probably have blended a bit better in places, but oh well, I'm hopelessly lazy. I got it good enough for government work and quit.

Government work isn't so bad, is it?

I'll say that the Copics do work better than the Sharpies and Bic Mark-Its for blending, perhaps because that is what they are made to do. So for those of you who have more patience than I do, Copics might actually be worth the money. But DH has informed me that he would kill me if I spent hundreds of dollars on markers.

Given our fiscal priorities at this time, it'd be justifiable homicide. I'd do the same to him if he spent $1,000 on handlebars for his triathlon bike. Fair is fair.

Anywho, I really, really like this card. A lot. I stamped the large outline poinsettia on scrap PTI white in palette noir and colored it with the Copics using the "I don't know what I'm doing but I'll keep adding color until it looks okay" method, which was remarkably successful, all things considered.

Then I cut it out, which was easier after I started using a craft knife rather than scissors. Next, I tried stamping a sentiment on the twill, which is a rather stiff nylon that lays nicely and cuts cleanly but does NOT take ink well. After trying three different inks, I gave up and went sentiment-less.

The half-beads in the center of the poinsettia are totally fab and fit perfectly in the circles of the image. Yeah!

The poinsettia is popped with dimensionals.

Do you like it? Do you have your own feelings about Copics? Care to share them in the comments, please? I'm dying to hear if I'm the only person strong enough to resist these beauties. 'Cause I am resisting, and it isn't even hard.

Posted by Susan Raihala at 1:00 AM