Earlier this week, I posted the following card: 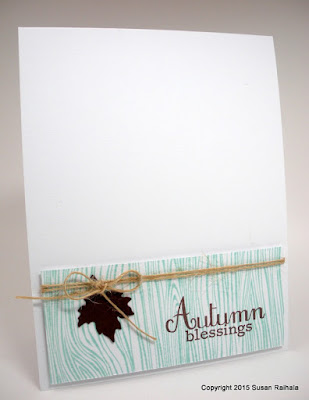 Lynne Phelps commented on that post and said, "I would also love to see this same card but with the sentiment moved straight up to just above the panel, to integrate the white space into the panel elements."

Now, I had actually considered putting the sentiment on the white space but decided against it because I felt the unity of the raised panel would suffer. Your eye stays in the raised panel here and moves around it. Dragging the eye to the white card base felt wrong to me.

But Lynne's comment made me wonder, so I made the card she asked for. 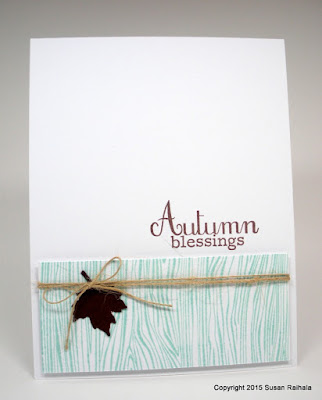 Take a look at them side by side. 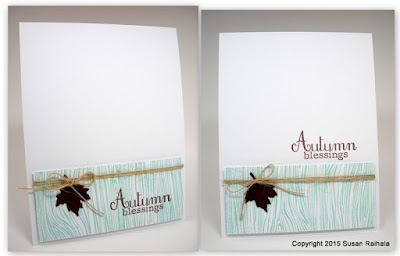 The side-by-side photo shows clearly how much more "breathing room" there is on Lynne's suggested version than on mine, which feels a bit claustrophobic in comparison.

If I'd put the sentiment on the card where Lynne suggested, however, I would never have left the card that way. I would have added something else to the focal point...making it bigger, perhaps a few more leaves in various shades of brown or a single larger leaf. This placement feels unbalanced to me with such a piddly-looking focal point (the dark brown leaf) separated from the large sentiment. In fact, the little spot of dark brown looks almost like a hole in the more open design, doesn't it? With the sentiment on the stamped panel, at least it looks like they go together.

Consider larger and/or more leaves plus the sentiment placed on the card base OR a smaller sentiment on the base with the single smaller leaf. Either would definitely be even better than my original card!

Thanks for suggesting I do this, Lynne. The next step will be trying to make that focal point look bigger and finding a smaller sentiment to use with the single leaf.