Here are two cards using the exact same design (at least as far as playing with positive/negative color patterns) but with completely different scale to see which I liked best just because I was curious and happened to have the right sized punches for an experiment. 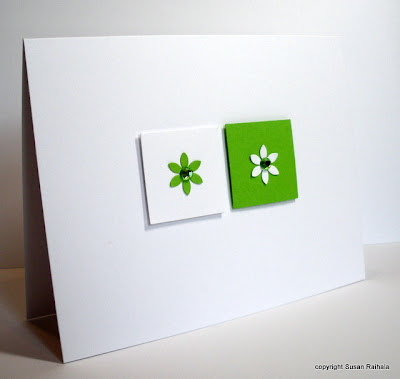 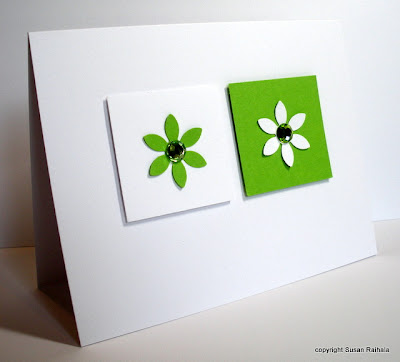 Does this make me schizophrenic or merely indecisive?

A couple of comments on the design. First, before I send these, I might add a sentiment under the squares. Or I might not. It would just depend on the occasion. Second, the rhinestones are all lime green because when I tried a clear one on the green flower, it looked gray and totally ruined the card. Putting green rhinestones on both flowers is unexpected, given the positive/negative pattern here, but having something a little unexpected often makes a card more interesting.

In this case, I think it works nicely.

Which do you prefer? Cute or bold? I honestly don't think there's a right answer to this, just opinion. Do you have any supplies that you could conduct your own experiment on scale with?

That was a dreadfully worded question. Please forgive me. I drove all day to another state, and just minutes before arriving at my sister's house, we got hailed on. It's been a long day. But good.