The winter issue of Take Ten magazine is pretty good! (Wow, it's been a long time since I've said that, hasn't it?) There are more CAS cards than usual, at least to my discerning eye, and I'm finding a lot of inspiration this time around.

The first card I felt inspired by was submitted by Anne Jones, and here it is:

Anne's card has some wonderful design going on. It's beautifully unified in theme and colors, it takes advantage of the rule of thirds, and it creates a background with a fab combination of light, curvy script in horizontal lines contrasting perfectly with strong vertical lines.

My plan to CASify (or clean-and-simplify) her design was to shrink her card onto a smaller panel and mat it on a large frame of white. My theme was chosen for Operation Write Home...their upcoming deadline for Valentines is the end of December, and they can always use Miss You cards. Here's my first attempt. 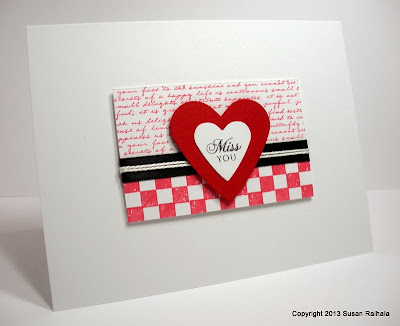 What I kept: 1) the contrasting backgrounds of script and a strong geometric shape (squares because I didn't have stripes), 2) string accent on a solid border, 3) single color plus a neutral (red and black rather than yellow and brown).

What I changed: 1) orientation from vertical to horizontal, 2) centering one main image rather than offsetting the main focal point and a second accent piece (because I didn't have a secondary piece and I didn't think a simple knot would have balanced the big heart well on that black ribbon).

My version is just not quite as successful as Anne's original card (though I don't think it's exactly bad). The scale of everything just isn't quite right. The stamped panel looks too busy with the squares (Anne's stripes are ever so much better!), and the centered hearts are too...centered. The sentiment is a bit too formal for the distressed checkered background, too.

Of course, I had to try again. And of course my approach was to CASify further. 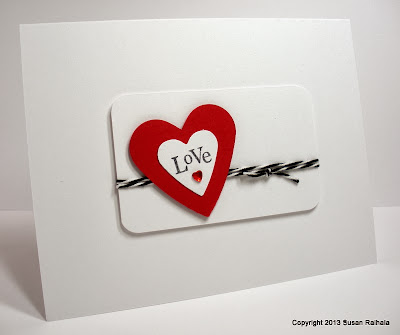 Well, that's one way to do it! Taking away all the patterned stamping certainly is cleaner and simpler, but notice how I returned to Anne's original layout by off-setting the hearts and even setting them at an angle rather than straight. Anne's sunflowers are heaped...not in a tidy OCD arrangement.

Changing the thread from a solid to black-and-white baker's twine ups the punch of the card considerably, giving a bit of pattern without too much busyness on my smaller panel. I also added an extra heart (BLING!) to build up the focal point more like Anne's original does with those lovely sunflowers piled on each other.

The change in sentiment allowed me space to add the bling, but it also adds interest because the whimsical arrangement of the four letters is looser and much more interesting than the very traditional Miss You sentiment.

Overall, I'm extraordinarily pleased with the final card. It definitely says, "LateBlossom made me!" But I never could have gotten there without Anne's card as inspiration.

Try something similar yourself. Either take a simple card and complicate it, or take a complicated card and simplify it. Feel your way to a balanced result that reflects your style as inspired by the original.

Supplies
I'm just too gosh dern tired right now, but if you want to know I'll tell you. All the stamps are from Papertrey. Off to the land of Nod.