Of Pens and Ink and Birthday Cards

I'll give you the cards first today because I have lots to blather about them that has nothing to do with stamping. You come here for the cards. The blathering is optional. 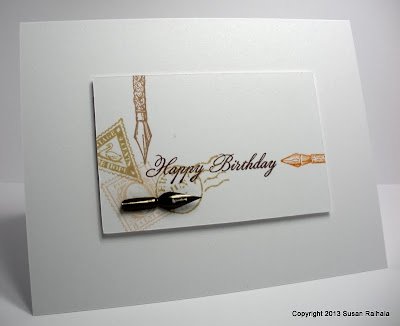 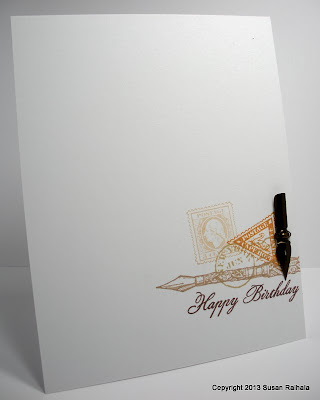 I rarely do collage-style stamping, but these two birthday cards are special. They are going to our adult nephews, whose birthdays are in the first few months of the year.

And yes, those are real, honest-to-goodness, old-fashioned pen nibs attached to the cards. The bulk doesn't matter because these cards will be mailed in boxes that include a fountain pen. And a check. Because young 20-somethings might have a bit of sentiment, but they can always use money.

Most of you know I was a writer long before I became a crafter. And from a very young age, I had a pen fetish. In college, as poor as I was, I treated myself to new pens whenever I felt blue...roller balls, felt-tips, even the cheapest ball point pens were an uplifting treat!

When my mom invited me to take a calligraphy class with her one summer during college, I jumped at the chance, and started enjoying old-fashioned dip pens in addition to the regular kind.

My fountain pen addiction began after my grandfather died. Papa wasn't a writer. He was a barnstorming pilot in the early days of aviation and then a captain in the United States Army Air Forces, flying a variety of bombers and heavy cargo aircraft during World War II and the Berlin Airlift. After all that flying, he settled down and worked as an auto body mechanic at a Ford dealership until he retired.

At some point during or after 1948, he purchased or was given a Parker 51 fountain pen. The Parker 51 began production in 1941, but Papa's pen has the aerometric ink bladder design, which wasn't produced until 1948. He kept the pen on his desk--a drop-top desk that he built himself--for paying bills.

After Papa died while I was still in college, my mother gave me his Parker 51, which gave me the bug to collect fountain pens. The 51 leaked a bit, and it was far too precious to take out of my house, so I bought a similarly designed (and inexpensive) Parker 45 to carry in my purse, where it still resides today.

Soon, after saving my pennies, Waterman fountain pens expanded my collection...the Laureat and Carene and Tuxedo. A few Shaeffers joined the fun. I returned several pens I ordered because they didn't write well, including a Montblanc (it leaked) and some Italian pen that was gorgeous but not smooth at all. For me, the collection was about using the pens, not merely displaying them or hoarding them as works of art.

When I left my job at Micron Technology, my friends collected money to buy me the mother of all Parkers...the Parker Duo Fold. I still smile when I hold it.

Since I had children, however, the time needed to care for fine fountain pens, to clean them and refill them, rub them with diapers, has diminished. Other than the Parker 45, I rarely use them anymore, although they are displayed on my bookshelf.

But as I said, display isn't a good reason for owning a pen for me. The Duo Fold and Carene and Laureat will be mine forever, as will Papa's 51. But the others are not so precious, and I've decided to gift them to the next generation...my sons, our nephews, our niece.

Fountain pens require care and now that Matt and Eli are adults, its time to send them theirs. I'm particularly excited about sending Matt a pen because he, like my grandfather, is a mechanic. I will tell him the story of my first fountain pen, and maybe it will mean something to him that I'm passing on one of mine to him.

If you made it this far, perhaps you'll share your story of your favorite pen in the comments. I do love a good pen story!