What a coincidence y'all asked for more CASification and make-over cards because I'd planned a few days of them after picking up the latest Take Ten. It has my CASification mojo hoppin'!


When I first started stamping eight-ish years ago, I read Rubber Stamp Madness, Rubber Stamper Magazine, and a few others. Most of the magazines back then were full of what I call "artsy" stamping: collage or mixed media cards with lots of brown. A lot of the stamp images were vintage, such as men in bowler hats with the letter D on their foreheads, Mona Lisa, court jesters, paper dolls, and such. There were also a lot of natural leaves, trees, and scenes.

Now way back then, I didn't know about a clean-and-simple card style (didn't seem like anyone was doing CAS except maybe StampinUp, but I hadn't heard of them yet, and I'm not creative enough to come up with it on my own). But I'd worked with a graphic design artist named Liz who DID do clean and simple, and I wanted to BE Liz.

Since all I saw in the magazines were vintage-style stamps, I bought a bunch of them, though I'm happy to say I never bought the man in a bowler hat with a D on his head. (No offense to anyone who did; I'm sure someone who isn't I could make a lovely card with him.) Then, armed with these vintage stamps, I set about trying to make cards like Liz's graphic designs and failed spectacularly.

As I learned about CAS stamping from SU and Julie Ebersole and other talented stampers at SCS, I started buying stamps that lent themselves to a cleaner look and miracle of miracles, I liked what I made with them.

But now I have drawers full of stamps that I bought years ago (though I did give a lot of them away), and they sit, unused, like the lost boys languishing in Never-Never Land, just awaiting the day I dump them in a box and take them to Goodwill.

Isn't that just the saddest thing you ever heard?

Then, a few days ago, I saw this card by Teresa Abajo in the Spring issue of Take Ten (which still publishes cards made with the man in a bowler hat with the letter D on his forehead): 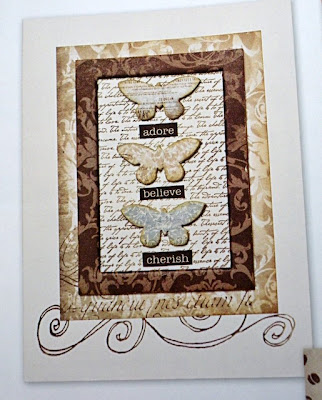 This card, which is both balanced and interesting visually, has soooo much going on, including a lot of brown. There are seven different patterns and at least three different scripts. Never in a million years could I pull this card off like Teresa has. But I decided, what the hey!, I'll see what I can do with it as a springboard to CAS. 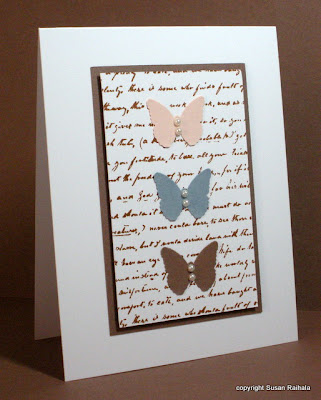 How did this happen? Well, it started with a color scheme. Of course there's brown, but the original card has (if you squint sideways and use your imagination) hints of pink and blue. So I punched Martha Stewart butterflies in blush blossom, bordering blue, and close to cocoa. Then I stamped the text stamp on white with close to cocoa ink and cut out the panel. It looked better to work light to dark from top to bottom.

The original three butterflies are all linked by a reverse-printed word under each. I ditched that design element in the interest of CAS but still needed to unify the butterflies somehow. I tried coloring white pearls with Bic Mark-It markers in matches to blush, bordering and cocoa, but couldn't get a good cocoa. Then I figured all-white pearls would unify them better anyway.

The cocoa matte grounds it nicely, but the white card base keeps the whole thing from being too dark.

So what do you think of my vintage CAS card? It totally works for me, but does it work for YOU? What vintage-style stamps do you have lying around that you could make into a CAS card? If you take up this challenge, let us know by posting a link to your card.

Up tomorrow, more artsy-inspired CAS in cards suitable for kids!

Posted by Susan Raihala at 6:48 AM

Email ThisBlogThis!Share to TwitterShare to FacebookShare to Pinterest
Labels: Make-Overs