My husband is one-half Finnish (Raihala...hint: when vowels outnumber consonants, it's probably Finnish), one-eighth Norwegian, one-eighth Swedish, and, for contrast, one-quarter Italian. Fortunately, since he's the chef in our house, the Italian dominates in the kitchen because one thing I've learned in 25 years of marriage to a Scandinavian mutt is that Scandinavians eat some weird sh..., um, stuff.

No offense intended to the lutefisk lovers out there.

I don't think any of George's ancestors came to America before about 1890. Some came through Ellis Island. His paternal grandmother was born in Finland, and in her old age, she swore like a sailor in Finnish, thinking no one would know what she was saying. Many of George's great-grandparents didn't speak English or learned it as a second language. When his family visited Italy in his youth, they hooked up with family. Close family. That's when he learned the saying, "Drinka more wine! Ita pushes the food down." I think that sort of rich ethnic heritage is just smashing cool and is part of what makes America great.

I, on the other hand, am a thoroughly American mutt, most of whose ancestors were on these blessed shores before 1800--and a fair few well before 1700. I had 16 ancestors who came over on the Mayflower (including the famous Miles Standish, who was known by those who didn't like him much as Captain Shrimp, because he was short and red of face....not much has changed in the gene pool, I'll tell ya!). The rest were a North-Carolina-and-Massachusetts gumbo of French, Swiss, English, Scottish, and French Canadians, and perhaps some Native American, but we aren't quite sure about that one.

Anyway, ethnic pride isn't exactly a part of my heritage. I was always envious of the Greeks in Charlotte...they got their own festival. All I got was barbecue, which is everywhere in the South. Every. Where. Awesome, but not special in quite the same way as baklava, if you know what I mean.

Perhaps it was the Scot in me that made me taste haggis when in Edinburgh, but no amount of pride in my touch o' the Scot could make me like it. I suppose every nationality has its disgusting cuisine.

Back to George's Scandinavian heritage. Scandinavian style (unlike Scandinavian food) fascinates me, and it's so exciting to see it making an appearance in the latest trends. What a refreshingly clean and simple and colorful style! This picture is from Better Homes and Gardens' Holiday Crafts. 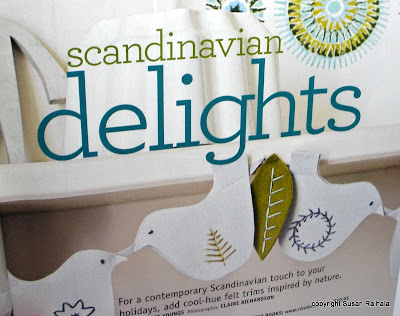 Those little birdies make me sooooo happy! I just had to see what I could do with stamps and my bird punch from StampinUp. 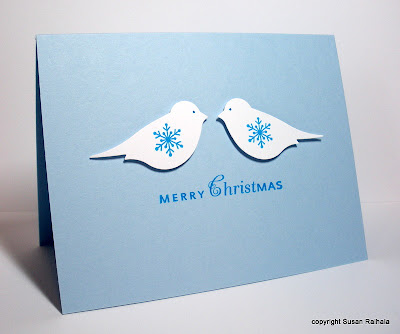 Design Discussion: I tried several small Papertrey Ink stamps on the birds, but none looked as good as this snowflake from Limitless Labels (or Holiday Labels...can't remember). The sentiment is from Silent Night. The ink is Memento Bahama Blue, and I used the matching marker to make the eyes on the birds. The base is SU bashful blue. LOVE this...so simple, so easy, so clean and fresh! So easy to mass produce, if you're so inclined.

I think the Scandinavian trend is one I will buy into, as in spending real money. Certainly, George's extended family will appreciate it!

Now, if only some company will make North Carolina barbecue-themed stamps. All my kin in Cleveland County will eat that up!!!

Posted by Susan Raihala at 7:19 PM