Using Your Smooch: Part 7, The Finale

We're down to the last two cards of my Smooch Fest...one that uses tiny strips, and one that returns us to where we began, with dots.

When I thought I was running out of energy with my Smooch cards, I still had a couple of random pieces hanging out on my desk, shimmering up at me expectantly. Just as I was about to throw them in the trash, I had a brainstorm and made this interestingly geometric card instead! Love this! The variation in color, line length, and line height make this very simple card so interesting visually. The sentiment (Clearly Besotted's A Little Sentiment set) is placed in the center of the card, and the lines flow around it and draw attention to it. Justified left, ragged right imply that maybe there's some other text covered and/or censored under the orange lines. It's just cool!

The second card is actually one of the first I made in the Smooch Fest...I simply forgot to post it at the beginning of the series. But I love it and wanted to share it with you, so here it is.

The set called Turning a New Leaf from Papertrey has some excellent leaves in it, and when I saw this ferny-looking branch, I thought, huh, don't ferns have little white dots of whatever on the underside of the leaves? (I never took botany, but a quick google search reveals they are spores for fern reproduction.) With that image in mind, I used the white shimmery Smooch to add dots to the green leaves.


When you add Smooch over ink, remember that the ink needs to be waterproof, or it will bleed unattractively into the Smooch. In this case, I used Memento cottage ivy. The sentiment is SU river rock, which isn't waterproof but didn't get dots, so it didn't matter, now, did it? 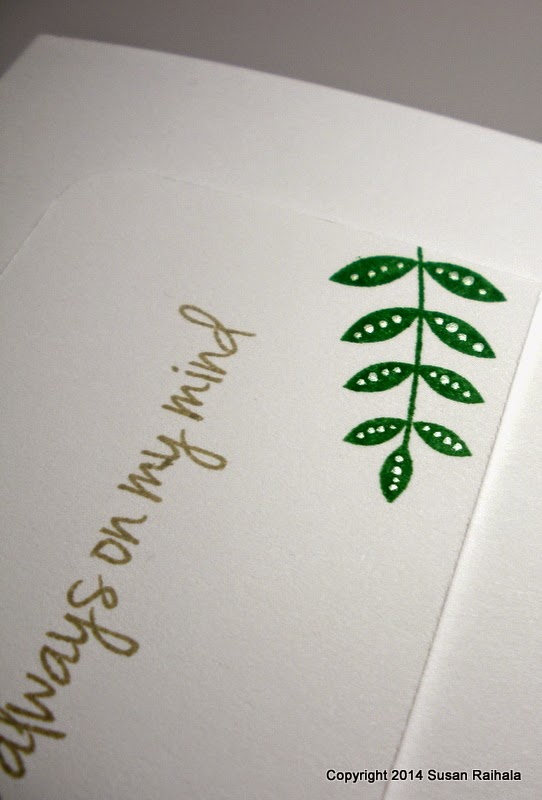 The contrast between today's two cards is interesting. The first is so linear and geometric, right down to the sans serif font of the sentiment. The second is much more organic and natural (in a stylized way, of course, but still...curvy) with a loose, handwritten-look sentiment. Both have loads of glorious white space and a very crisp feel.

So, now I've thrown a lot of different ideas at you regarding Smooch, the shimmery ink in a bottle. I hope you've found at least a few ideas you want to try. Reader Cynthia posted a comment suggesting I try to make marbled paper out of Smooch...because it FLOATS on water! The last time I tried marbling paper was over a decade ago, and I still cringe when I remember the mess that ended up in the trash.

But it's only paper...and maybe worth a try, seeing as I still have plenty of Smooch left to play with!

Posted by Susan Raihala at 3:00 AM