The Coolest Thing I Ever Gave my Son: EONAC20

"Thanks, Mom! This is the coolest thing you ever gave me!"

Those are the words my son shouted when I gave him this: 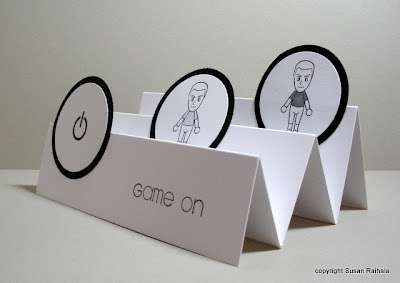 Yes, he loves the Wii, and yes, he has his game on. 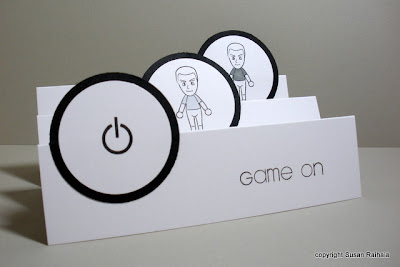 I made this for EONAC20. When I read the challenge on Sue Berker's blog, I realized what a rut I've been in with cards. Everything I've made lately is either 4.25" x 5.5" or 4.25" square, with a simple fold. EONAC20 is to try a different fold, one you have never tried or haven't used recently. I immediately thought of a staggered accordion-fold card I saw in a magazine recently and went from there.

This uses the Game On set from Clear and Simple Stamps, which I bought after Sue recommended checking out CSS's kid sets. Given Nick's response, I plan on using it more. CSS makes high-quality photopolymer stamps and has some great designs, if you haven't already checked them out. And no, I am not paid to say that. I just like to push stamps. Makes me feel better about having so many myself.

Once I'd made the Coolest Thing I Ever Gave my Son, I decided to make another card with a half-front. The Wii remote stamp gave me the idea. I wanted it to be in the background but not interfere with the Mii winner image. I love how clean and minimalist this turned out, especially when you consider that the black line running down the center was drawn with a marker; it's not a cardstock layer. I rock. 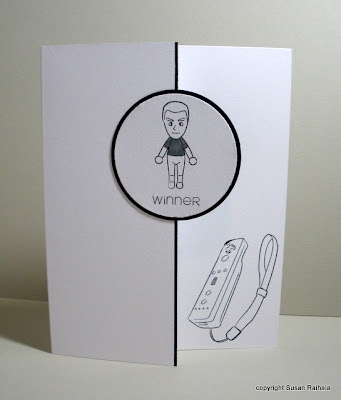 Shot at more of an angle, it's easier to see the construction of the card. The white circle is punched with a 2" punch, and the black circle is cut with a Creative Memories circle cutter. My next punch size up yielded too big a matte and it looked heavy and unbalanced the card. We can't have that, now, can we? 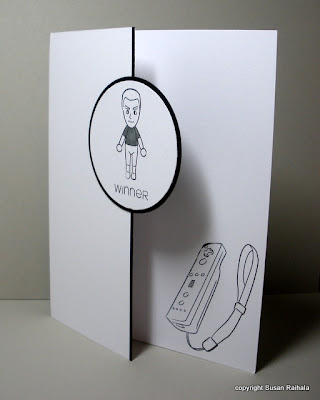 I've got another, different fold to share tomorrow, if I can get it photographed. In the meantime, why not try your hand at EONAC20 yourself. It's fun and has opened up possibilities in a very exciting way!

Posted by Susan Raihala at 3:54 PM