Scale Matters: Before and After

First of all, thank you all so much for your kind comments on my last post. I'm so very excited, and it makes me even happier to know that you are, too.

For today, I wanted to make a super-clean card using the Martha Stewart whale punch, which is just so stinkin' cute. But the experience turned into an entire Simplicity Tip on scale. So here we go with a Before and After. 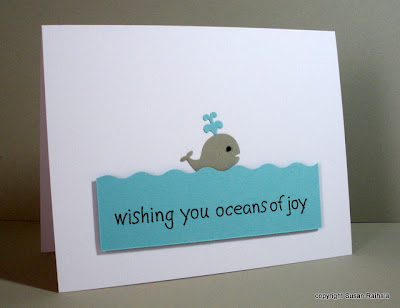 We might title this one Where's the Whale? Good grief, he looks sooooo small on a standard 5.5" x 4.25" card, doesn't he? That sentiment is too big and further takes attention away from the whale. Plus, he's stuck in the center (because the sentiment was centered and it looked weird for him to be offset over it), which makes the whole design look fairly uninteresting.

And yes, I used old-fashioned deco scissors to make the waves. At first, I used the Fiskar's wave border punch, but the waves dwarfed the whale even more, so I switched to the scissors, which worked much better for scale but not well enough to save the whole card, LOL! 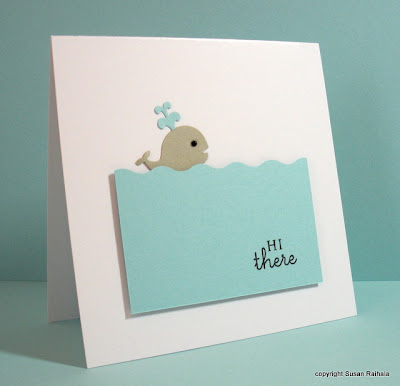 So I adjusted the scale by using a 4.25" square card, moved the whale into the natural "sweet spot" on the top left of the card, and used a smaller sentiment in the "sweet spot" on the lower right. The scale is much more pleasing to the eye now, and the offset layout more balanced and interesting.