Real Egyptian papyrus is just plain cool. I mean, seriously, this stuff was the only paper available before the Chinese invented wood-pulp paper and started exporting it to the West in the Middle Ages. The ancient library at Alexandria, the burning of which was the greatest tragedy in history for book-lovers, was filled with thousands upon thousands of papyrus scrolls.

I bought the papyrus to use to cover a book I made for my aunt, who is a wood-worker. (She loved the book!) And of course I bought more than I needed. So here is a card using a piece of it. In keeping with the ancient tradition of it, I used a verse from the Book of Psalms, and decided that I would make a card for my uncle, who is an amazing man of faith.

The leaves, from SU's Fantastic Foliage (discontinued), were rock-and-rolled using VersaMagic ink, which is nice and thick and doesn't bleed into the papyrus.

Yes, I wasted some papyrus figuring that out.

Papyrus is pretty flimsy stuff, so I mounted it onto a piece of cardstock so I could pop it up and wrap the twine around it. The twine knot looked feeble, so I tried tying a bow, which also looked feeble. That's when I decided a button would at least be in keeping with the masculine feel of the card. I wish I'd had a button that was slightly smaller and not as dark as this one, which seems too chunky to me, but it'll do.

Maybe this is a sign that I need to order PTI's rustic button assortment, eh? 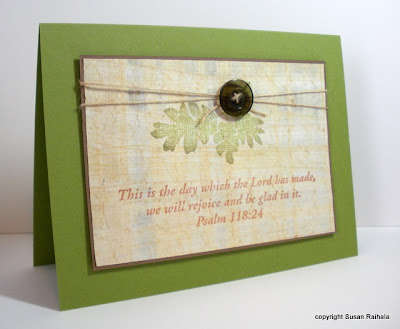 Papyrus lends so much texture and interest to a card, and those who are more skilled at dude cards than I am will find it simply amazing to work with.

Remember to leave a comment answering today's question to be included in the random drawing for today's little give-away, 12 small pieces assorted art papers, including several sheets of papyrus.

What's your favorite way to add texture to a card?
Posted by Susan Raihala at 6:30 AM