Holly and a Tag

Today's card uses a corner punch I'd forgotten I have...until I pulled out the ticket punch for another card and saw it lying in the drawer.

I'll bet none of you ever has that particular first-world problem...having so much stuff you forget what you have.

Anyway, the sentiment stamp from Papertrey's Happiest of Holidays fits perfectly on a tag shape, so that's what I did with it. The holly makes a nice, festive backdrop, too. 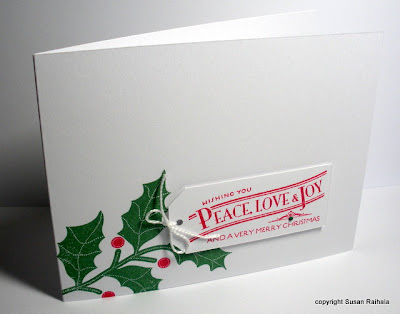 The little tiny bling on the tag is the same green as the holly...it's just too small to register as anything other than black on the photo. Notice how the red berries guide the eye to the tag? I tried using red thread and then green thread on the tag, but both were visually distracting. White was an okay compromise that doesn't stop the eye from going to the sentiment.

UPDATE on Memento Inks: There's nothing to update. I got a concerned response to my original email asking for photos, which I sent, and I haven't heard anything back. Some of my favorite older pads are starting to dry up (whatever would I do without pear tart?!?!?). I'm going to replace them and hope for the best.

I hope you all had a lovely weekend!